Without a doubt, Fiji is a foodie heaven. First, there are tons of unfamiliar ingredients and unique flavors to explore. Some of the foods and recipes used in Fiji don’t originate anywhere else in the world. Even when they are reproduced overseas, it just isn’t the same because the ingredients aren’t as local or fresh.

Which brings us to the second point about Fijian food – it is consistently made with local, easy to source ingredients (we have a tough time not munching on the amazing tropical fruits between meals).

There are several traditional or customary meals you have to try in Fiji. These foods emphasis many of the common flavor combinations in Fiji, including seafood, coconut, tarro, lemon, cilantro, and cassava.

Kokoda or Fijian ceviche, is a traditional food on many of the Fijian islands, and it all starts with freshly caught, local fish. The raw fish is marinated in lime and lemon juice, which “cooks” the fish. This is the same preparation process used for Peruvian ceviche, but after marinating the fish, kokoda has a very special ingredient – coconut.

Another meal at the cornerstone of Fijian food is lovo. The lovo isn’t a single dish or food, but rather a style of cooking. It means to cook in the ground, and is similar in method to the New Zealand hangi. Fijians start by simply digging a hole. Then, rocks are heated, once hot enough these are placed at the bottom of the hole. Of course, in the settings where travelers are likely to experience lovo, these holes are already dug and prepped for cooking.

The foods traditionally cooked in the lovo are poultry, fish, and pork. Sometimes marinated or flavored, these ingredients are wrapped in banana leaves and placed into the lovo to cook. Other root vegetables and starches, such as yams, toro, and cassava are cooked on top of the proteins. The hole is covered up with earth and left to cook for two or three hours.

Many of Fiji’s famous foods are tied to the country’s Melanesian and Polynesian cultures, but the Indian immigrants to Fiji have also left a huge footprint on cuisine. Foods that combine traditional Fijian and Indian flavors are everywhere on the islands, particularly in places where tourism is also common. And you should not shy away from these foods. Here you’ll find some of the best Indian flavor combinations and recipes in the world.

A favorite snack or lunch option in Fiji is roti with potato curry. This is the type of meal that is frequently made in Fijian homes and shared among the entire family. When you do find this delicious option on a restaurant menu, this is exactly what to eat in Fiji.

Kava isn’t a food, but a beverage. Yet the rituals and traditions around this natural drink are significant in Fiji. In fact, there is an entire ceremony that accompanies drinking and sharing this very traditional beverage. 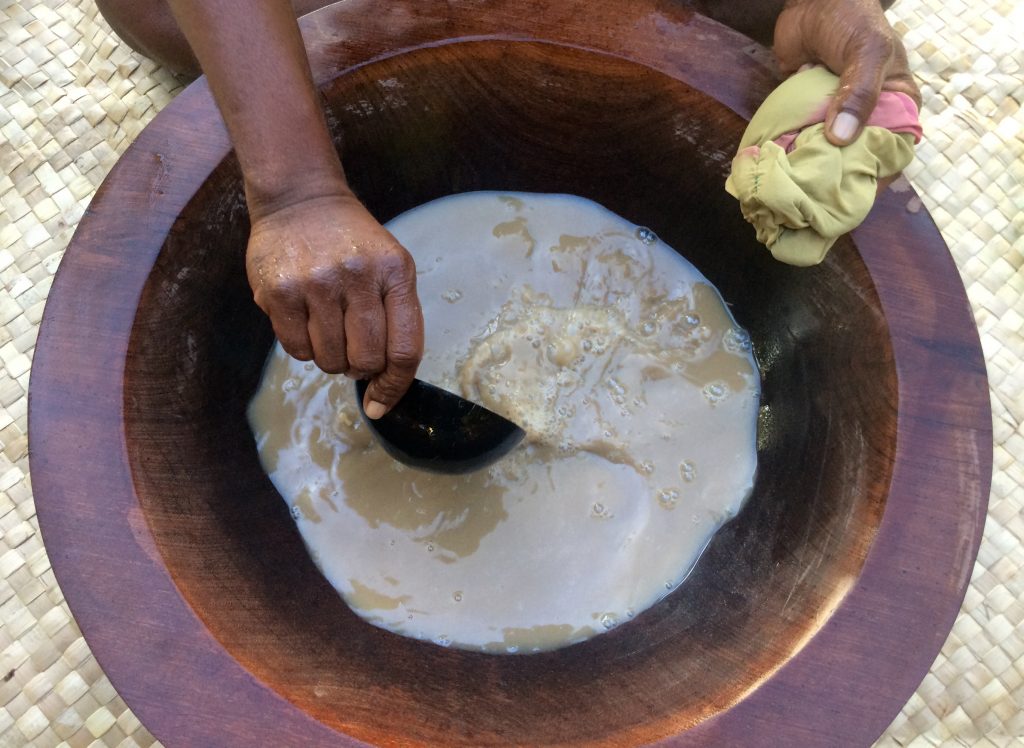 To begin, everyone participating in the kava ceremony sits in a circle. Once seated, certain people in the group will start to grind the kava root into a powder. It is then mixed with water and strained through a cloth. Once prepared, the first person to drink is the village’s chief. The other village elders and most important people are offered kava next. Then, the rest of the room is invited to share in the beverage.

While most visitors have a positive experience at a kava ceremony, it’s important to keep in mind that kava is a mild narcotic. The drink will probably cause tingling and numbness in your mouth, tongue, and throat. Afterwards, it’s common to feel relaxed and carefree, similar to waking up from a leisurely nap.